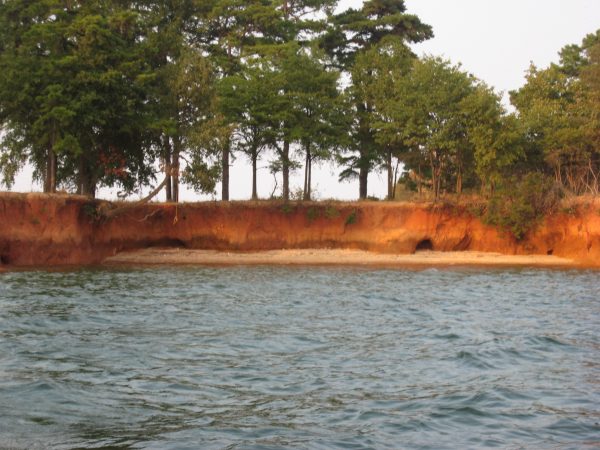 The bad attitudes of the disciples were not improved by the fact that they were forced to row into the teeth of a strong headwind. As strong arms grew tired, they swapped out rowers. Night fell, and angrily the disciples labored on through the wind and the waves.
It was nearly three in the morning when Judas, who had been rowing for the last two hours, got fed up. “I DON’T GET IT, ROCK!” the irritated disciple snapped. “WHY WOULD THE TEACHER MIRACULOUSLY FEED THIS HUGE ARMY AND THEN NOT USE IT? WE SHOULD BE MAKING PLANS AND ORGANIZING AN ATTACK ON THE ROMANS, BUT INSTEAD WE’RE ROWING THIS REDICULOUS BOAT! WE’VE BEEN DOING THIS FOR HOURS, WE’RE GETTING NO WHERE, AND I’M FED UP WITH IT!”
“Do you want to get out and walk?” Rock growled back from where he sat holding the tiller.
“Uh…Rock, look!” The words were spoken by John, whose wide eyes were clearly visible in the darkness. He was pointing into the sea behind them. Turning, Rock stared in amazement at a radiant figure walking toward them on the rolling sea.
“WHAT IS IT?” Matthew cried out. He was in the furthest end of the boat and struggled to look over the others.
“IT’S A BEING!”
“IT’S A GHOST!”
“IT’S A PERSON!”
“IT’S JUST ME!” a familiar voice called back. “DON’T BE AFRAID!”
“It’s the Teacher!” John exclaimed. “He’s walking on the water!”
“He’s going to walk right past us!” Thomas called with concern. “He knows we’re upset with Him!”
“Well, He’s not walking past me!” Rock announced as he stood up in the boat.
“LORD,” Rock called across the waves, “IF IT’S REALLY YOU, COMMAND ME TO COME TO YOU ON THE WATER!”
“COME!”
With cautious excitement Rock slid his legs over the side and was amazed that, when his feet touched the water, the surface was solid. A wide grin spread across the rough fisherman’s face as he stepped eagerly toward his master. Rock had only taken a few steps when he was far enough away from the boat that it no longer blocked the wind. Suddenly the fierce breeze hit him firmly in the back, staggering him. Rock turned and saw how far he was from the violently rocking boat as another blast of wind and spray hit him in the face. It was at that moment that he began to sink. “SAVE ME, LORD!” he cried and stretched out his hands to the Teacher.
Jesus quickly grabbed him and lifted him up.
When they were both in the boat, Jesus said to the embarrassed Rock, “Why did you doubt?” As He said this, He looked around at the rest of them. They had all doubted Him. In less than twelve hours, He had worked two miracles that only God could do, and yet when His plans went against theirs, they doubted and hardened their hearts. It was clear that Jesus wasn’t the Lord that they expected. The question was if they would they accept Him as the Lord that He is. But Jesus knew this was the challenge they needed to face, and things would happen this next day that would force them to choose.

*Opsaria is the Greek word for sardine-size fish that are caught in abundance in the Sea of Galilee. The small fish are pickled in brine and used as a condiment.

** In Matthew 14:21 it says “and there were about five thousand men who ate, aside from women and children.” The greek word for aside can also be translated without. It is my belief based on the events that occurred that there were no women or little children there. It makes more since that this was a five thousand man army ready for a king.