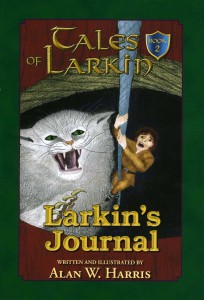 People who know me as a veterinarian are usually surprised to find out that I’m more of a “right brain” person. I’ve been successful with the science and the medicine but all of that is work for me. To relax I need to do something creative occasionally.

I’ve dabbled in painting and drawing, wood carving, stained glass, furniture building, solar panel construction, film making (see blog post: You Ought to be in Pictures), and writing. Most of these were just short flings, but the writing I was encouraged to pursue.

With my imagination was going wild, I hurried back home and began writing what to me was a really exciting adventure story. I eventually wrote fifty pages about the tiny woodland people whom I called “Larkin”, but the demands of school forced me to file it all away.

I tried reading it to Lisa and Clint, my two oldest children, when they were very young, but they were quickly bored with it. Years later when we were all sitting around one evening telling family stories, Lisa remembered it, and she and Clint asked me to read it again.

“We will this time, Dad. We promise!” They returned enthusiastically.

So out it came. They indeed loved it, and all of the children literally begged me to write more of the story. It was their encouragement that pushed me to start writing it again.

Whenever I would finish a new chapter, Valerie, my amazing wife, would cook a favorite meal to celebrate. Afterwards we would go to the den where I would get the kids to review with me where we had gotten to in the story. When I read the new chapter to them, I made up voices for each of the characters in the story, just to make it more fun.

It took years to finish it, but even when the older children went off to college, they insisted on being included in the special “Larkin Nights” whenever a new chapter was to be read. We actually had to Skype a couple of “Larkin Nights” one summer when one of my daughters was in China.

I felt a great sense of satisfaction and accomplishment when I finished the first book, but the kids were disappointed. They wanted more. So I started writing a new story, and the “Larkin Nights” returned.

As of this post, the second book in the Tales of Larkin series is completed and in print, and, yes, I am almost halfway through writing the third book. If my kids have anything to do with it, I won’t be stopping any time soon. They have already come up with a story line for a fourth Larkin story!

If you liked my post I would invite you to become a subscriber at no charge to you and you will recieve the new posts as they are uploaded. Simply click on one of two ways you wish to recieve the posts to the right of the screen.

God’s Blessings to all,
Alan Harris

« What Is The kingdom Of Heaven And How Do I Know That I’m In It?
How Do You Get Your Ideas for Writing »