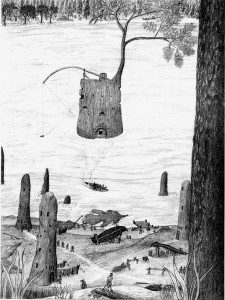 My question today is, “Are you a Renegade, a Makerian, or a Larkin?” It really is a question worthy of consideration.

Renegades are bad. They are selfish, arrogant, domineering, greedy, rebellious, and dishonest. Renegades are uncaring, self-serving, bitter, and cruel.  They know they’re bad and are happy being Renegades. “Renegadeness” is very easy to spot in your character.

Makerians are good. They are selfless, giving, loving, merciful, kind, and honest. Makerians seek God’s will in all circumstances and pray without ceasing. They know they are saved by the Maker’s grace and that their righteousness is not their own but is a gift from their Lord Jehesus. You don’t have to be around a Makerian very long before you recognize who they are. If you are a Makerian, others can tell it.

Now if you see yourself as a Larkin, you are in a very dangerous position. Compared to Renegades, Larkin look great. They are industrious, loyal, kind, and loving to their families and friends.  They are moral and even religious; yet, they are in desperate need of a savior. The dangerous part of their position is that they are ignorant of their need. Because they can always find a Renegade to which to compare themselves, they feel good about where they are. Larkin don’t realize that their “goodness” isn’t good enough. The “goodness” that the Maker demands is far better than anything a Larkin, Renegade, or a Makerian can produce. Jehesus is the only one who can produce that kind of “goodness”.

The really great news is that Jehesus is willing to cover anyone with His goodness if they are ready to trust in Him as their Savior and fully submit to Him as their Lord. Once you make Jehesus Lord, then He gives you everything He owns . . . EVERYTHING! What a deal!

Renegades know they need help; they just don’t want it. Makerians have found the treasures that are in Jehesus and won’t give Him up. But the Larkin . . . the Larkin just don’t get it. They’re ignorance has blinded them and left them with a false sense of security. I hate it for the Renegades, but they have made their choice. My heart truly agonizes for the Larkin, because they are just as lost as the Renegades, but they can’t see that a choice needs to be made.