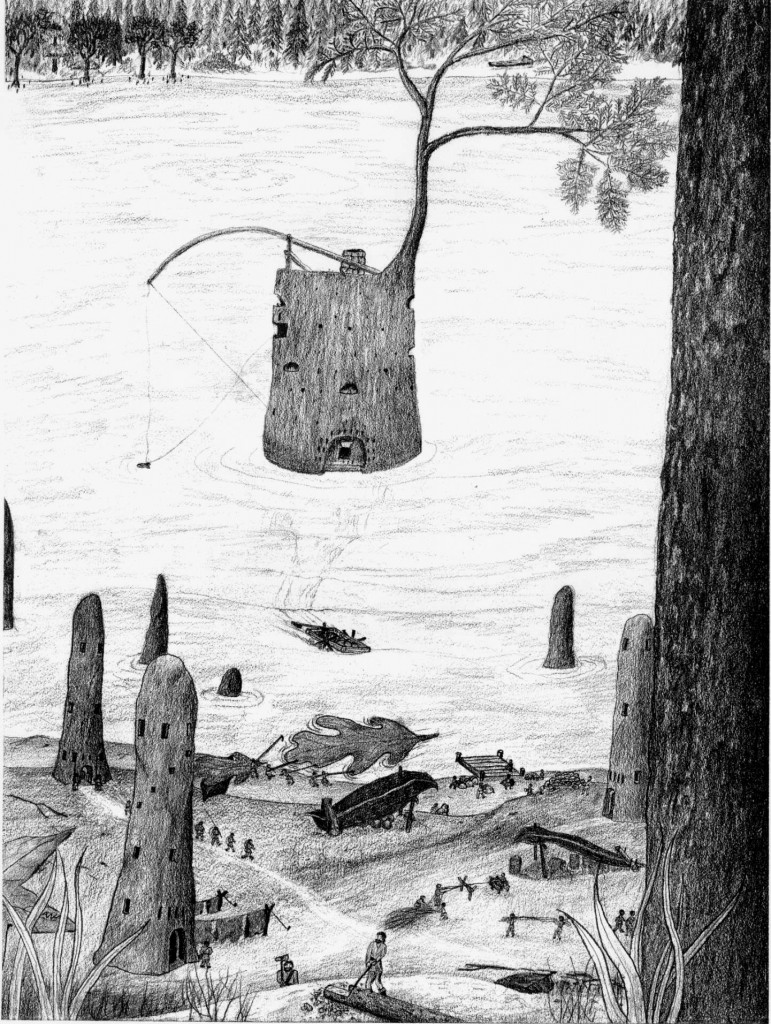 I was recently asked indirectly, through a wonderful book review at www.simplydarlene.com, how I came up with my idea for the “Turtle,” the paddle-wheel barge the Makerians used in the book Hawthorn’s Discovery. My new young Larkin fan also asked me how I came up with the fishing contraption on top of the Makerian stronghold at Stillwaters. Questions like that always encourage me, because that means that someone else is as interested in the story as I am.

“So here she goes,” as Rush would say.

Let me start at the beginning. I came up with the idea for Stillwaters because in the woods where we were living when I began thinking of the story, there was a pond.  About ten feet away from the north shore was a small, stunted tree growing on its own little island, which was no bigger than the base of the small tree. I said to myself, “What a great stronghold!”

As I thought through the story, I decided to let the Makerians live there. When I tried to figure out how they would get back and forth to the land, I thought of the paddle boats that I had ridden in with my family at the lake and at the beach. That’s was when I got the idea for the paddle barge. By putting a paddle wheel on each side that could be turned by a crank, the barge could be driven easily back and forth from the stronghold to the shore. “The Turtle” is actually one of my favorite inventions in the book. (The truth be told, they’re all my favorites.)

Now I actually had to do a lot of thinking about the fishing rig on top of Stillwaters. Since they lived on a small lake, they had to have some way to catch fish. In my mind I figured that they could either catch a lot of little fish or just the occasional big one. I decided that the Makerians were smart enough to come up with a way to catch the bigger fish in the lake. So then I had to figure out how they would do it. Using a large fishing pole that they could work with wenches and pulleys seemed to be the most logical way. It actually turned out to be a pretty exciting way to catch fish.

Darlene, please pass my appreciation to your son for two good questions. God’s blessings be on all my readers.

« Where Do You Get Your Ideas?
“Whatever Happened to Burdock and Charlock?” »