Hello, All. As I was putting together my blog post this time I thought that I might do something different. Several years ago I wrote a short story about what it might be like if the church in the United States was undergoing persecution. This is a little different subject matter for me but I thought you might enjoy it. I will be posting it in two parts. The following is part one: 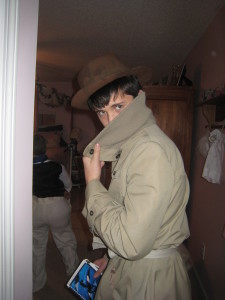 The young man knocked on the oak door and then stuck his head in the office.

“You wanted to see me, Mr. Robertson?”

“Sit down, Thomas, and close the door,” the well-dressed man said gruffly.

The college student crossed the room and dropped into one of the arm chairs directly in front of Mr. Robertson’s imposing desk.

“Thomas, as one of the Educational Administrators of the New Self Church, I am responsible for the educational and spiritual needs of our members. Since we are the only officially approved church, the government is deeply concerned that we instruct you in the principles of good citizenship. Good church members are good citizens. Remember that.”

“It has come to my attention that you have been sleeping through some of your good citizenship and government loyalty classes.”

Thomas squirmed in his seat.

“There’s a church policy handbook in front of you. Turn to page fifteen and follow along as I go over some of the points you’ve missed.”

Opening the handbook, Thomas found a hand-written note. It said, “Disregard what I’m saying and read this.” Ignoring Mr. Robertson as he droned on, Thomas read further. “Be careful what you say,” the note warned. “They suspect me of being apart of the underground church movement, and I’m certain this room is bugged.

“Last week government agents raided a house church across town. They arrested ten of our friends and bulldozed the house down. Eight of the friends escaped and are hiding in a safe house, afraid to return to their homes. I have collected some money to help care for them, but it’s too dangerous for me to take it to them. I know you’ve risked a lot for the cause of Christ before, and I hate to ask you again, but our friends are in desperate need. If you are willing to take the money to them, then ask me if I’m through with you yet. If you are unable to be my courier, tell me that you don’t have time for this lecture right now.”

After a moment of prayerful deliberation, Thomas interrupted Mr. Robertson. “Are you about through with me, sir?”

“No, I am NOT through with you, Mr. Miller!” Mr. Robertson growled. “Turn to page thirty-three.”

Here Thomas found another note telling him where to make the delivery and where to find the money. “Enter my back yard by climbing the fence in the rear of the house,” he read. “I will leave the small door in the rear of the garage unlocked tonight. You will find the gift under the front bumper of my car. BE VERY CAREFUL!  My house is under surveillance.”

After leaving the meeting with Mr. Robertson, Thomas’ mind was racing.

Thomas unlocked his old rusty bicycle where he had chained it to a street sign and peddled off.