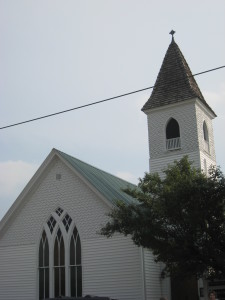 Thomas sat quietly in the bushes watching for movement in the deepening shadows around the Robertsons’ yard. It had been dark for over an hour. He shivered slightly, both from the slight chill in the air and from excitement. He had seen a black sedan parked at the end of the block but had observed no one moving around.

Keeping to the shadows, Thomas slipped over the fence, crossed the yard, and slid inside the unlocked garage door. He found the bundle easily and placed it inside his shirt.

A faint sound just outside the door alerted him, and he looked quickly for a place to hide. A few moments later, the rear door burst open, and two agents rushed in with flashlights and guns in their hands.

“He’s hiding,” one snapped. “Search for him.” As they began their search, a soft click was heard at the far end of the garage near the large front door.

“He’s behind the rear of the car,” one whispered. “You go around that side, and I’ll take this side.” They moved cautiously to the back of the car. Finding no one, they both bent down to look underneath.

As they did so, Thomas dropped from the rafters at the other end of the garage and leaped through the back door. By the time the agents got back up, Thomas was closing the door behind him. Hurriedly working their way back around the car and to the door, the agents jerked it open. As they did so, two large full garbage cans, one stacked on top of the other, came crashing in on them where Thomas had leaned them against the door. By the time they finally got out of the garage, Thomas was clearing the back fence.

Thomas ran swiftly up the alley, but he was still fifty yards from the end when, with a screech of tires, the black sedan wheeled into the lane and accelerated towards him. Thomas quickly scaled a wooden privacy fence to his left just as the car slid to a stop behind him. He heard a shot ring out as he dropped to the ground on the other side and felt wood splinters pepper the back of his neck. The young courier sprinted across the yard and quickly cleared the fence at the front. Without a pause, he raced across the street, jumping the fence of another yard. As he darted across this yard, a large black dog snarled and charged after him. He just cleared the back fence as the snapping jaws lunged for his legs. Landing in another alley, Thomas made his way toward the closest end.

The black sedan raced down streets and alleys searching for their prey. Turning down yet one more alley, they almost ran over an old man bent over his cane, hobbling along.

“Get out of the way, old man!” one of the agents yelled as they roared by. The old man stumbled out of the way as the car raced past, shaking his cane at the disappearing sedan.

As the car rounded the corner and drove away, Thomas straightened up and tossed aside the stick he was using as a cane and pulled off the nasty cap he had found run over in the road. Jogging to the end of the alley, he traveled a short block to an old business district. The young courier ran to the rear of the nearest building and climbed up onto a wooden awning above the rear door. He stepped onto a window ledge and was able to reach the down spout, which he climbed to the roof. From there, three stories above the street, Thomas was able to watch the people and cars moving below. He noticed that the black sedan was parked along this avenue. As he watched, another black car pulled up beside the first one. After a few moments, they both drove away, heading back into the neighborhood that Thomas just left. Thomas carefully worked his way across the tops of the buildings until he had arrived at the far end of the block. Cautiously, he descended to the street and then disappeared into the night.

At eight-thirty the next morning, there was a knock on the side door of a white framed house on Hemmings Street. A middle-aged lady cautiously answered the knock. She saw a ragged-looking young man looking away from the door.

The young man did not turn to look at the lady, but he held out a package to her. “Special delivery.”

“I don’t understand,” she responded. “What’s this?”

“It’s help for some needy friends,” the young man responded, still looking away.

“Oh!” she said with a little start as she suddenly realized what the package contained. Then, as she understood that he averted his gaze so that if he were caught he could not recognize her, she quickly looked away from him as well. “Thank you so much!” she continued. “We have been praying for this.”

“You’re welcome,” he responded, “but thank the Lord. He’s the one who sent it.

“I need to leave now,” the young man continued. “The friends send you love and greetings in Christ’s name. Please tell our friends in need that they are not forgotten.”

“Did you have much trouble getting this to us?” the lady asked.

The young man paused for a moment. “None to speak of,” he finally answered.

“May God bless you,” she said quickly as he walked away.

“He has,” came the parting response.

I hope you enjoyed my little story, but more importantly I hope it made you think about the future of the Lord’s church in this country and your commitment to Him.

« Part One Of An Original Shortstory By Alan Harris
Are You A Renegade, A Makerian, Or A Larkin? »