This is a continuation of my last blog post. So if you have not read that post you should go do it now. It is entitled The Wompus Rat: Tales of Larkin’s hilarious “Scary Story”. It contains some interesting background information for this post and you can find it at this link:https://storieschangehearts.com/the-wompus-rat-tales-of-larkins-hilarious-scary-story/. 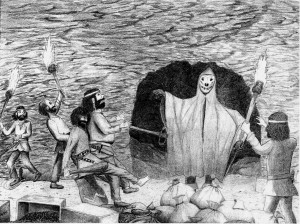 When in my book Tales of Larkin: Hawthorn’s Discovery I was writing the part where Rush tied a rat skull onto his head, wrapped his cloak around himself and held the dead rat’s claws to scare the Renegades, I thought his disguise needed a name. Remembering Preacher’s ghost story about the Wompus Cat, I decided to christen it “The Wompus Rat.” I laughed out loud when I thought of it.

Here’s a section from my book quoted from chapter 17: “The Wompus Rat”:

“I’m telling you blokes, it was the most horrible thing I ever saw. It nearly kilt poor ol’ Muckly, there.”
“What was it, Cap’n?!”
“It weren’t no livin’ creature. It was a demon!”
“A demon? What kind of demon? What did it look like?”
“It was big and was wearing a black robe. Its bony fingers had fierce-looking claws.”
“And they felt fierce, too, mates!” the fat Muckly whined as his wounds (in his rump) were being treated.
“Its face,” the captain continued, “was a rotting skull with a long nose and huge fangs.”
“I knowed it!” a grizzled old, toothless Renegade spat out. “I know’d it fer sure as soon as I heard it. Cap’n, you done stirred up a wompus rat!”
“That’s bad, right?” asked one of the guards tending to Muckly.
“Bad?! You ain’t seen bad till one of them thangs gets after you.”
“What are they, Stargazer?”
With his audience spellbound, the old Renegade named Stargazer began to tell all the legends he’d ever heard about wompus rats. “Why them thangs is the badest, meanest, viciousest demons they is. They lives in holes deep in the ground where death dwells, and when they gets hungry, they slips up on a victim and rips his heart out!”
“Mercy on me!” squealed Muckly in a rather high-pitched voice. “He was goin’ fer my heart!”
Rush slipped away from the excited Renegades and headed for the tunnel to the slave cells to hide his stuff. “I ain’t had this much fun since that night I sewed up my brother in his own sleepin’ bag,” Rush giggled to himself.

I have to admit, I probably had more fun writing that chapter than I did any other. Rush was the perfect character, both to come up with the idea and to thoroughly enjoy tormenting the Renegades with it. After a particularly successful use of his Wompus Rat disguise and realizing that he will have to escape from the Renegade Lair soon, Rush sighs to himself, “I’m shor’ am gonna miss this place an’ all the good times.”

Before I close, let me encourage you to subscribe to my blog. It’s free and easy. Just click on one of the buttons at the top of the page on the right and choose which way you would like to receive my blog posts.

Thanks for reading, and God’s blessings to all of you.
Alan Harris

« The Wompus Rat : Tales of Larkin’s Hilarious “Scary Story”
Where Did You Learn About All of the Plants You Mention in Your Stories? »