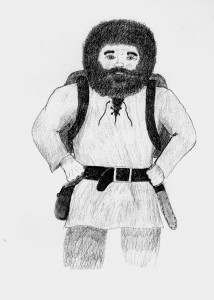 When I first thought of the character Tobin the Flyer in my book, Hawthorn’s Discovery, his name came to me without knowing what “the Flyer” part meant. I just thought it sounded interesting. It was obvious that he had to do something involving flying for the name to fit. I considered that he may have invented a leaf glider and used that to travel, but the more I thought about it, the only fitting conclusion I could come to was that he had somehow trained a bird to allow him to fly on it.

I knew a lot of clients from my veterinary practice who had a special gift for relating to all types of animals. I’m sure you know people like that as well. Animals just seem to love and trust them. I decided that Tobin was going to be that type of person.  In my story you discover that Tobin is quiet, unassuming, and almost shy. He’s not as comfortable around people as he is around his crow Nightwing or his squirrel Chatter.

I explain in the book that Tobin found a crow’s nest with three eggs in it, the mother having been killed by lightning. Tobin kept the eggs warm for a while, and eventually one of the eggs hatched. Because Tobin took care of this baby crow until it grew up, the bird became very attached to Tobin. As time went by, as Tobin says, “I just taught him a few things.”

I never explained in the book the origin of Chatter the squirrel. It just didn’t seem to fit in anywhere. In my mind there is only one way for Tobin to have a squirrel. This actually comes from a number of years ago when I was working for a veterinarian in North Carolina. One of the technicians there had a reputation in the community as a compassionate lover of animals and was very successful at raising baby squirrels that had gotten blown out of their nests after storms. I see Tobin finding one of those orphaned squirrel babies and caring for him as he did Nightwing. 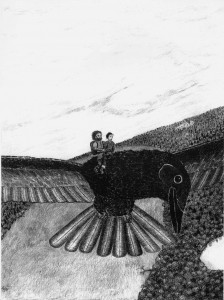 Tobin has been a great addition to the story. He’s just a calm, down-to-earth guy who happens to do some amazing things. Some of my characters are kind of over-the-top, but I wanted a character like Tobin in the book because you can learn so much from people like him. Many of you may not feel that there is anything special about you but we each need to accept that God made us who we are for a reason. Pursue the interests God has given you for the purpose of His glory and then watch what God will do.

Many of you will be glad to hear that Tobin is in the third book in the Tales of Larkin series that I am now writing. But what is really the most  amazing about Tobin is that, as mature and responsible as he is, he has a brother like Eldan. The blessing here is that the Eldans of the world make the Tobins look really good!

Thanks for reading, and if you know of any other Larkin fans, how about sending them the link to the web site. You can also find me on Facebook, Goodreads  and Twitter. If there are subjects about which you would like to have me write, just leave me a comment.