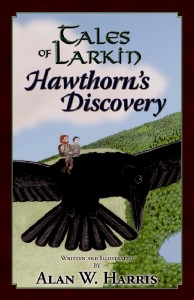 I really can’t speak for how other people write or even how it’s supposed to be done; I can only speak for what works for me. I try to spend some time thinking about the story line before I write so that I don’t hit dead ends. I don’t want to just make things up as I go along and find my characters in an unwanted situation that I can’t get them out of.

When I wrote my first book, Tales of Larkin: Hawthorn’s Discovery, I had spent time thinking about the high points of the story all the way to the end. That gave me good mental guidelines as I wrote each chapter. Generally speaking, I always knew where I needed to get my characters by the end of the chapters.

That worked great for the first half of the book, but then unforeseen things began to happen. One of the characters, who I had intended to kill off in the course of the story in order to show my children how a godly person faced death, became one of their favorite characters. I had caught enough grief when one of their “semi-favorite” characters met his untimely demise. As much as they were attached to my “intended victim,” I knew that if I followed through on my plan, I might have to move out of the house.

I solved this problem by creating and introducing a new character, who was to be developed into my substitute victim, into the story. But as I worked this new character into the plot, it required little changes to the story line. Those changes led to other changes, which in turn led to still more later on. The end result was that my original ending didn’t really make sense.

I had pictured the ending of the story in my mind for so long that, when it became apparent that my original ending would not work, I had a hard time mentally picturing a different ending. Eventually, I had to just keep writing what happened next and find out where it led.

It actually became exciting for me to write the last three or four chapters because, even by then, I wasn’t entirely sure how they were going to get out of that mess. I was as relieved as my kids were when we got everyone through the last battle with the Renegades.

As you can see, writing the Tales of Larkin is as big an adventure for me as it is for you readers. I always wonder what’s going to happen next. Thanks again for joining me on these little journeys. If you have some questions about the Larkin stories, please leave me a comment, and I will try to answer them in a blog post.

« Where Did You Learn About All of the Plants You Mention in Your Stories?
Questions About The Tales of Larkin Ending That Never Happened »