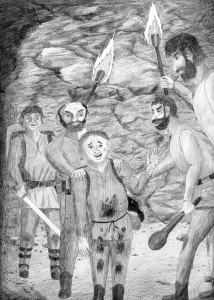 What I really want to know is about MY favorite character, “honest” Snake! Did Snake ever become a Christian? Did he fight back against the new and evil Lanaran regime? Surely a little P.S. on the blog wouldn’t ruin Larkin’s Journal! What happened to Snake?!

This blog post and the next is my answer to “What happened to Snake”:

Those of you who have read book two, Tales of Larkin: Larkin’s Journal, know that Snake and his band of semi-reformed bandits had to fight off the evil Menden and his guards as they tried to stop the escape of the Lanaran queen and her daughter, Princess Lily. Snake’s heroic delaying action allowed Larkin and his friends to get the queen, Lily, and the others, as well as their supplies, loaded onto the rafts and floated downriver to safety. When they knew that their friends were safe, Snake ordered his warriors to retreat into the woods where they hid from Menden’s vengeful soldiers.

When General Kalispar found out that the queen and the princess had escaped, he was furious and had Menden executed. Kalispar sent two rafts full of soldiers downriver to attempt to find his escaped prisoners, but the soldiers were never heard from again. [If you ask me, I think critters got ‘em].

General Kalispar was very angry that his plans were thwarted, and he was looking for revenge against those who had helped in the escape. Snake and his clan had to stay on the move since his former boss, General Kalispar, knew about all of the old Bandit strongholds.

Snake led his followers to the northern extent of Lanara. They spent most of their time hiding in the wild country above the northern city of Stoneleigh. Occasionally, they would disguise themselves and slip into the city with an incoming caravan. Once in, they would trade herbs, salt and copper they had found for the supplies that they needed and then slip back out to return to their hidden camps.

Snake considered attacking the caravans that traveled between the cities to get supplies, but two things changed his mind:

First, Snake realized that the more of a nuisance that he and his warriors became to General Kalispar, the harder the general would try to hunt them down.

Secondly, at this time one of Snake’s companions named Trout began asking Snake to tell him and the others about the God that Captain Kid followed. [Remember, Captain Kid was Snake’s nickname for Larkin.] The more Snake told them about what Larkin had told him about the Maker and His Son Jehesus, the more Snake’s band felt that they needed to show respect for the Maker and His Son.