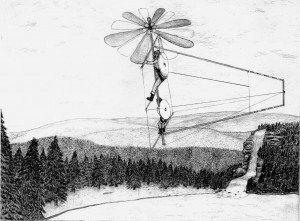 A really fun part of writing the Tales of Larkin books is trying to figure out the different inventions that the Larkin people make. In the first book, Hawthorn’s Discovery, the Larkin and the Renegades are living in a Stone Age culture. You will discover when you read the second book, Larkin’s Journal, that they originally had more advanced technology but lost it over time.

When the Makerians come into the story in book one, you realize very quickly that their culture is much more advanced, primarily because they have constantly sought God’s help for meeting their needs. Also, translating and reading Larkin’s three hundred-year-old journal didn’t hurt their scientific advancement.

I really had a great time writing about the Makerian culture. As Rush said to Eldan, “You have the neatest toys!” They discovered that, by hitting a piece of flint against a rock containing iron, they could start fires easily. The Makerians have light sticks that are resin vials containing a mixture of juices from glowing mushrooms and fireflies which glows when you shake the vial.

Their knowledge of natural medicine far exceeds the knowledge the Larkin have. (The Renegades could care less.) In book one Eldan used the thorn of an arelia bush to numb Rush’s wound so Eldan could sew it up. I learned that on a field trip once. If you chew on the thorn of an arelia bush (otherwise known as a Hercules club), it will numb your lip for a while. So I decided to work that little fact into the story.

The most fascinating thing that I thought the Makerians invented was the whirly bug. Those were the flying machines that look like personalized helicopters with maple seeds for blades. I had a great time thinking about how they made those. My children were actually a little disgusted at Hawthorn for not wanting to fly in one of them. Truth be told, I can relate more to Hawthorn’s view then my children’s.

Because writing about the inventions is such a fun part of the story for me, I have put a few more in the third book that I am now in the process of writing. I won’t give any of it away just yet, but let me say that the Makerians have a whole lot more going on than what the first book told you.

Thank you for reading. Your support means a lot to me. Please let others know about the blog and the web site. And if you haven’t done so please subscribe to the blog. It’s as easy as clicking on the button beside the blog post.