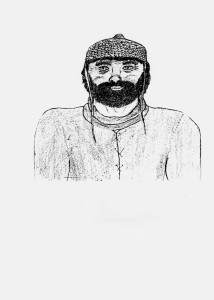 I have a special guest today who has agreed to an interview. I know many of you are looking forward to hearing from Rush, a Larkin hunter from the third clan of Larkin.

We’re glad you could be with us today, Rush. The first question today comes from my daughter Juliana, and she asks, “What is the craziest thing you ever did?”

Rush: “To begin with, you tell her that I’m down right o-fended by her question. I don’t do crazy stuff, at least not as crazy as Jay does. I’ll have you know that all o’ my plans is well thought out. That’s why they work so well.”

What about the Flip-a-thang, Rush? As I recall, that invention didn’t work out the way you planned it.

Rush: “Burn yor’ hide, you just had to bring that up, didn’t ‘chu?! Well-l-l, the truth be told, the Flip-a thang would’a worked just fine if’n my companions hadn’t o’ got nervous and jumped too soon. As it turned out, they only launched the wolf spider up into the air instead of flippin’ ‘im over onto his back. So that one weren’t totally my fault.”

Well, then, why don’t you tell us about some of your other “well thought out” ideas.

Rush: “Okay, here’s one I thought was a good’un. Me an’ some of my friends was doin’ some scoutin’ once when a nest of centipedes got after us. Let me tell you, them thangs is persistent. We had a hard time of it till we run up on a small creek. Some of the fellers couldn’t swim, an’ that’s when I came up with my idear. When we came to the edge of the creek, I saw some vines near the surface of the water runnin’ from our side to the other. I had my troopers throw a leaf in the water and jump on. Then we each pulled ourselves across the creek with the vines, leavin’ the hungry centipedes snappin’ their jaws on the bank.”

Correct me if I’m wrong here, Rush, but didn’t Eldan show you that trick about using a leaf for a raft?

Rush: “Yo’r about the exasperatin’est rascal I know! Yeah, he did, but using the vines was something I came up with, so by rights it was my idear, okay?

Okay, okay! Don’t get yourself so worked up. Why don’t you tell us about your brother. I believe in the first book you mentioned that, when you were young, you sewed him up in his own sleeping bag.

Rush: “Hee, hee, hee! Yessiree, them was some good times! Our folks died when we was just little squirts, and my Uncle Chert had to raise us. I rec’on we was kinda rough on him. My brother Deek was 14 months younger than me, an’ we was both purdy competitive. Fortunately, I was bigger than Deek, so if the sitchiation got too rough, I could always just sit on him. Thangs have gotten a lot better between us since Jehesus got ahold of me. I think Deek’s been noticing that I’m tryin’ to be nicer to him, ‘cuz we been talkin’ to each other a lot more. My plan is to tell him about the Lord Jehesus real soon now.”

Thanks so much, Rush. There are a few more questions, but we are running out of time. Why don’t we try to do this again in a day or so and finish up the rest of these questions? Speaking for all of your fans out there, thanks for doing this for us.

Also if any of you readers haven’t subscribed to the blog yet, it’s as easy as clicking the “Subscribe” button. Till next time, blessings to all,

« Where Did You come Up With Fun Inventions in the Larkin Stories?
An Interview with Rush – Part 2 »